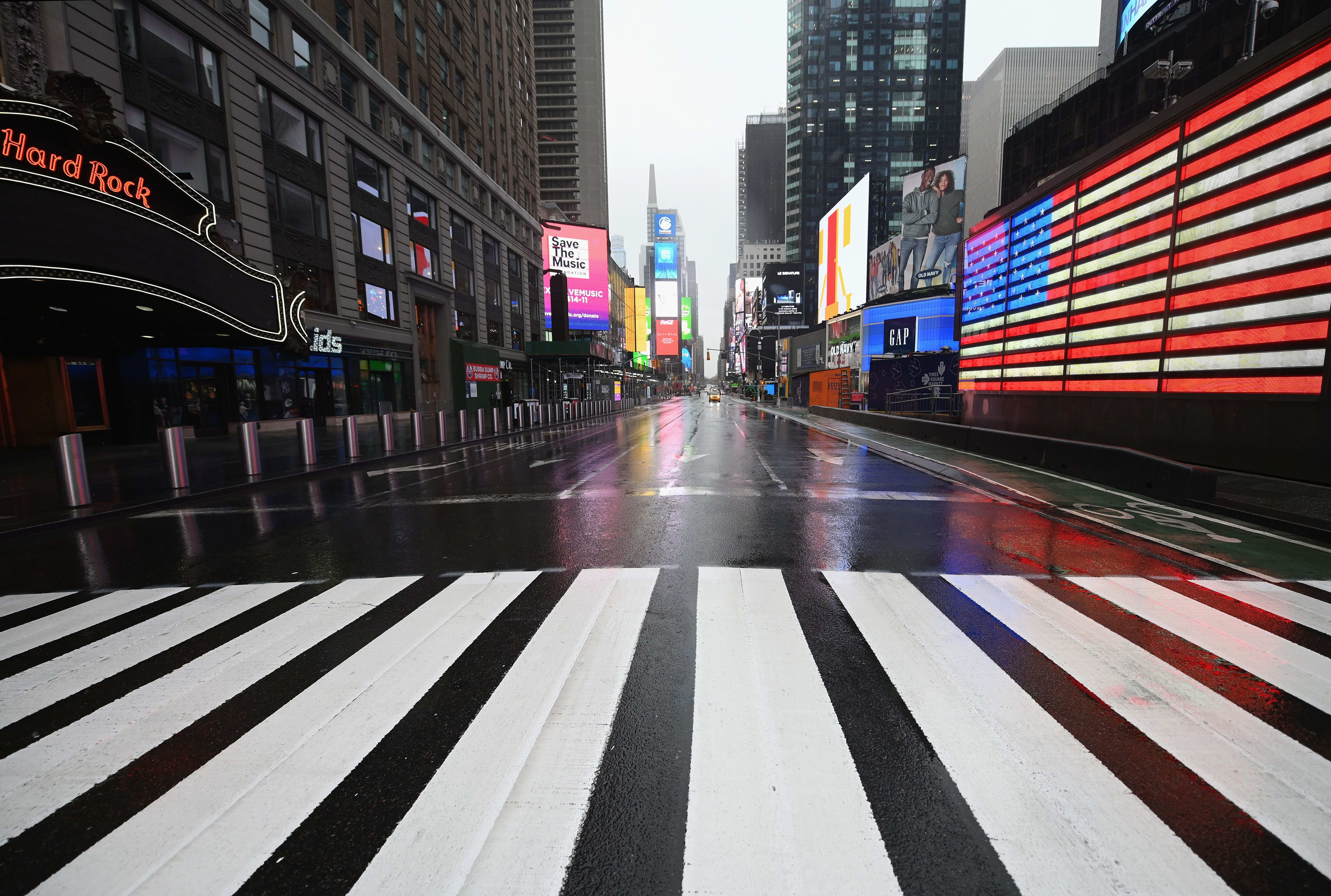 A view of the empty street at 54th street and 6th Ave in Midtown Manhattan in the wake of the coronavirus outbreak on March 20, 2020 in New York City.

The Covid-19 pandemic continues to shut down cities around the world, bringing the global economy to a crawl. Governments are taking unprecedented measures to combat the pandemic, putting in place stay-at-home orders for more much of the world’s population in an effort to flatten the curve of infection.

The U.S. just surpassed China’s official infection load, and those numbers are expected to dramatically increase in the coming weeks. In New York City, the number of confirmed infections doubled in three days. India just issued a 21-day lockdown for its population of more than 1.3 billion. Italy’s death toll just passed 10,000 and it recorded the worst single day death toll of more than 900 deaths. U.K. Prime Minister Boris Johnson has tested positive and is in quarantine.

The following are 2020 scenes showing some of the impact on cities across the globe.

A deserted street in New Delhi on March 27

Highway is seen empty after the nationwide Janata (civil) curfew was imposed in response to curb the pandemic of coronavirus (COVID-19) in India on March 22, 2020.

Daily life in Venice, Italy, on March 15, 2020 during the Coronavirus Emergency. Most of the streets everywhere around the city are empty and very few people on the streets, going out just to buy food at the supermarket or taking their dogs out for a walk.

The original epicenter in Wuhan, China, on March 10

The usually bustling Regent Street in London on March 26

A near-deserted Regent Street in London, England, on March 26, 2020. According to the latest daily figures a total of 578 people have so far died across the UK after testing positive for the covid-19 coronavirus.

The Coliseum in Rome on March 28

A picture shows the empty square in front of the Colisseum in Rome on March 28, 2020, during the country’s lockdown aimed at stopping the spread of the COVID-19 (new coronavirus) pandemic.

Traffic is light on East First Street after the new restrictions went into effect at midnight as the coronavirus pandemic spreads on March 20, 2020 in Los Angeles, California.

Empty Champs Elysees avenue is pictured on March 28, 2020 in Paris, France. The country has introduced fines for people caught violating its nationwide lockdown measures intended to stop the spread of COVID-19.

Pigeons are seen on a nearly empty Las Ramblas on March 23, 2020 in Barcelona, Spain.

A woman waits for a bus on a nearly empty street in downtown Chicago, Illinois, on March 21, 2020.

The French Quarter in New Orleans on March 27

A view of an empty street in the French Quarter amid the coronavirus (COVID-19) pandemic on March 27, 2020 in New Orleans, Louisiana.

Where can Americans travel to in December?
Here Are The Current Travel Restrictions In Every State
The poshest hotels that opened in Asia in 2020
21 Reasons Why This Japanese Department Store Puts American Stores To Shame
Incredible Bulgogi Delivery and Chili Paste Village (Day 16)